Star trails are a way of capturing the movement, in any direction, between the Earth and those tiny balls of gaseous fire in the night sky, using a long exposure. Or multiple long exposures, depending on how much you like editing. On purpose, even, unlike a lot of those first attempts at star photos that we ALL have.

Let’s start with the basics, shall we?

First, you’ll want to find a dark sky area (there are websites, such as Dark Sky Finder and overlays on apps such as PhotoPills that can help you). Next, be certain that there is either a new moon or you have time before the moon rises, and that the weather will be relatively clear. You will need a camera that allows you control over settings and ISO, extra batteries and memory cards, a tripod and a flashlight. You will also need a remote/timer combo, or even better, an intervalometer. Finally, if it is a chilly night, be prepared with warm clothes and gloves, as your camera will be working for quite some time.

Star trails can be created facing any direction with dark, clear sky, but if you want to create the signature bullseye trails, you’ll want to shoot facing either the north or south pole. The north pole is marked with the north star, Polaris. To find Polaris, you’ll look for the Big and Little Dipper constellations (Ursa Major and Ursa Minor). Polaris is located at the tail end of the Little Dipper.

The south pole, unfortunately, coincides with no bright star. You need to extrapolate its position using other constellations. The most common method is to draw an imaginary line from the top of the Southern Cross down through the bottom, then continue along the plane for approximately 4 ½ times its length. You can also draw a perpendicular line from the center of the two stars of the Pointers, to approximately where the Southern Cross imaginary line would intersect it.

How high the Poles rest above the horizon line can affect how you compose your image. If the Poles are fairly low, you have a bit more freedom regarding your composition as a whole. The higher the Pole is above the horizon line, the further up towards the sky you will need to tilt your lens, which typically means getting very close to the base of your subject.

Slight variations in your directional setup can vastly change the feel of an image by changing the look of the sky. The “bull's eye” and the “falling stars” looks both offer their own type of drama and may highlight different aspects of the rest of the scene differently. If you’re 200 years old, you can chart the stars’ path using a compass and star chart. If you own a smartphone, because you aren’t Abraham Lincoln, your night sky apps can help you figure out how the stars move across your particular patch of sky.

Star trails can be created using one of two basic ways. The first option is to use an extremely long shutter speed with a low ISO, an aperture close to the sweet spot, and a way to keep the shutter open without moving the camera (a timer/intervalometer and a very solid tripod).

Because of the extreme time value, you’ll also want to capture a dark frame to help deal with the inevitable hot spots and noise.

The second, more complex way of creating a star trails image involves taking a large series of shorter exposures one right after the other, then stacking and blending in post-processing. Although this process involves more work, the final images - post stacking - tend to have significantly less noise and fewer hot spots.

If you are going to attempt to capture multiple exposures manually, at the very least, add a timer to your night sky kit. That being said, an intervalometer makes life MUCH easier. Furthermore, you should always check to see if your camera is set to RAW. If it’s not, it should be.

You’ll also want to set your white balance, instead of leaving it in auto, to keep the color consistent throughout the series. Otherwise, things like traffic light trails through your frame can trick your camera into changing the white balance for those select frames. White balance is strictly a matter of personal preference, usually set based on the color of the ambient light around you. You’ll likely want to take a few test shots to determine what looks best to you.

Next, it’s a matter of determining the correct recipe for your gear and level of patience. Here are three options you can try as starting points.

Now, I’m sure you’re wondering, “Why that 10 to 15 seconds downtime between frames?” Well, it gives your sensor a little time to cool before starting the next series to limit hot pixels. Any longer rest periods, however, and there will be noticeable gaps in your stars.

Also, it should be noted that in the 3rd scenario, you’re still risking some noise and hot pixels at the far end of that time value range. If you look at it comparatively, though, it will still be better quality than just leaving your shutter open for 30+ minutes. These shorter time values will also help keep anyone exposure from crossing the line into “over-exposed” territory. Finally, if something happens to shift your tripod - wind, shifting sand, a bump, etc - you’re not losing the entire night’s work.

If you want a fuller set of star trails, you will want to shoot for longer than an hour at a higher ISO. A shorter total shooting time or a sky with significant light pollution can make your sky feel sparse.

As you can see, all three “stacking” recipes can be repetitive and tedious. Remote, exposure, timer. Rinse and repeat. This is where an intervalometer is invaluable. You can choose your exposure time value, the amount of rest time between exposures and how many exposures you want to take in any given series.

Alternatively, some cameras have a built-in interval timer in the menu. You’ll have to check your particular model to see what features are available to you.

The only other thing to consider when you’re capturing star trails is your foreground. If you are creating an image with foreground elements, then you may want to consider taking a frame at a lower ISO to use as part of the final image. That will help reduce noise in the foreground and give you the opportunity to focus stack. At lower ISO’s, you can either light paint the foreground or capture an extreme long exposure to capture a properly exposed foreground. You’ll then need to blend that foreground with the sky frames in post-processing.

Whether you’re taking an extreme long exposure or several stacked captures, it is absolutely imperative that the tripod remains secure and steady through the series. One shift or jostle can ruin an entire star trail series, potentially wasting hours of work. However, as long as your tripod is secure (and safe from any roaming sticky fingers that may nab it when you’re not looking), you can literally walk away and just come back when it is finished. It’s the ultimate multitask! You can create an amazing piece of night sky art, and nap at the same time.

A battery and memory card check before you begin is also a good idea. How frustrated would you be to come back from a nap, only to find out you only caught 15 minutes before the batteries died? Always have a few fresh batteries with you for night sky shooting. If you’re still concerned, you may even go as far as turning off the LCD display for the duration of your outing.

So what do we do with all of these frames once we are done? Edit, of course!

If you intend to create just one single, extreme long-exposure image, then your edits will be primarily noise reduction and simple edits to taste.

If you intend to stack, however, you can use specific software, such as Starstax which will automate the process for you. If you’d prefer to be a little more involved in the edit, you can use Photoshop to layer your exposures, auto-align them, and then change all except the bottom layer in the stack to blend mode “lighten”. From there you’ll need to do a little noise reduction, and potentially blend in your low-ISO-foreground, and viola! You’ve completed your star trail image! Time to call the galleries and get this bad boy sold! (Or, you know, put it on your Instagram. Whatever works for you).

In the end, whatever method you use will come with a sense of accomplishment and the joy of spending some time watching the stars move across the sky. Like most things in life, photography isn’t just about the final image. It’s about the experience. Make sure to live in the moment and enjoy the beauty you are capturing in front of the camera!

Shannon Kalahan is a professional photographer, author, blogger, teacher and owner at Seeing Spots Photography. Like many things in life, Seeing Spots Photography started out as a happy accident. In 2002 she started volunteering her photography skills for an equine rescue. It was from there she eventually adopted her horse “Spot”. The name of the business is a homage to the circumstances that lead her down this photographic journey. Shannon offers both workshops and private photography classes in the New England area. In Discussion with Fabian Hurschler

How did you become interested in landscape photography? When I was a teenager, small digital cameras were all the rage
Jul 1, 2021
5 min read
Jun
29 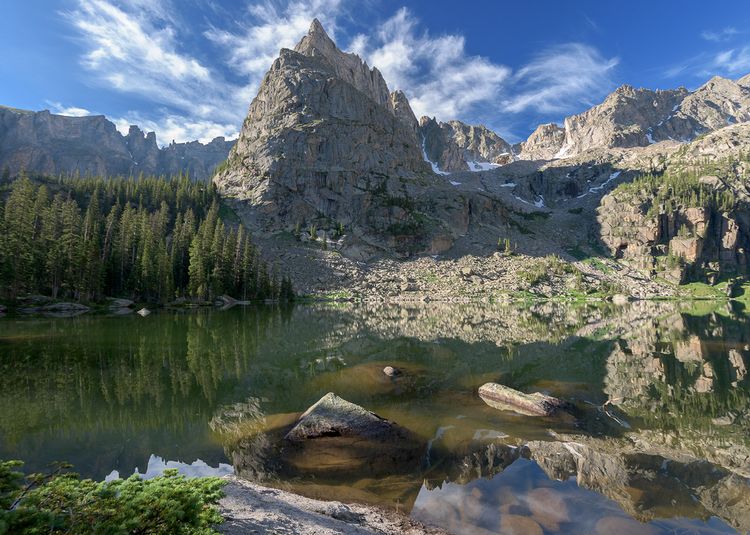 Daydream with me for a moment. You’re standing on the shore of a pristine alpine lake. Glassy water reflects
Jun 29, 2021
5 min read